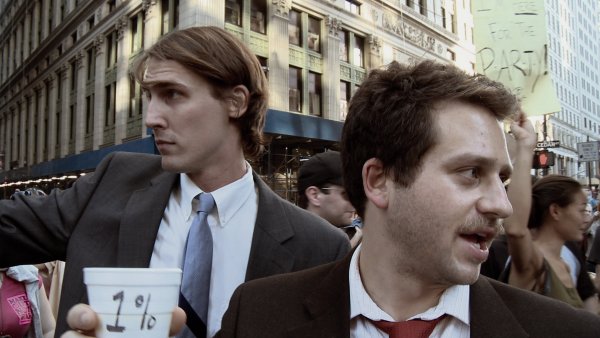 Two New York investment bankers attempt to shut down the Occupy Wall Street protests of 2011, creating their own counter movement called Bankers Unite. But if this is what the 'One Percent' looks like, it may be time to get out of the market.

Brendan Gibbons began his directing career in 2004, co-writing and directing "Gangsters" and "Love Story," the award-winning trailers for the Tribeca Film Festival. His subtly timed performances and distinct compositional style has since led him to become one of the commercial industry's most sought after directors, creating campaigns for clients such as Comedy Central, ESPN, Showtime, Sony, DirecTV, Snickers, Sprint and National Geographic. His work employs a unique combination of striking, cinematic visuals and comedic storytelling. Gibbons has enjoyed recognition on the industry's highest award stages including Cannes, D&AD, the Clios, AICP and One Show. In 2011, he bridged the gap between commercials and film, directing the awardwinning comedic short Sheep Impact for Carlton Dry Beer in which Steven Segal portrays a 26-year-old man competing for the affections of a young Australian woman. He also directed the short Dear Josh, which was recognized for outstanding achievement at numerous festivals including AFI and NoSpot. Preoccupied marks Gibbons' first narrative feature. Brendan is currently in development on a second feature film, a comedy entitled Salamander.