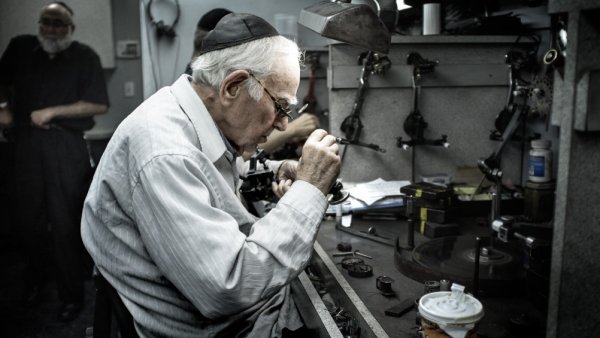 In New York City's diamond district, behind the glistening jewelry markets and through a maze of narrow corridors, sits a ninety-two-year-old diamond cutter named Max Fuchs. He works quietly at a cutting bench cluttered with blocky metal tools, his hands worn from years of shaping rough stones into modern cuts. As the diamond industry moves abroad for lower-cost labor, Fuchs believes he is among the oldest in an ever-shrinking field of New York diamond cutters. He takes pride in his craft: 'You can take a diamond that's, let's say, a broken diamond, and you bring it back into shape. ... It's a masterpiece--like Picasso.'

Award-winning documentary filmmaker Nicholas Weissman, has led projects from documentary features to time-sensitive short form video packages for major print and network news outlets including National Geographic Channel, Time Magazine, Sports Illustrated, and The New Yorker. His first feature length film, Minutemen, produced by Weissman and Directed by Corey Wascinski won the Best Documentary Award as well as the Grand Chameleon Award at the 2010 Brooklyn Film Festival. His work and passions have taken him to Russia, Haiti, Cuba, South Africa, Japan, India, and many others. He is also a member of the Brooklyn Filmmakers Collective.

Director Nicholas Weissman will be available for Q&A after the screening.