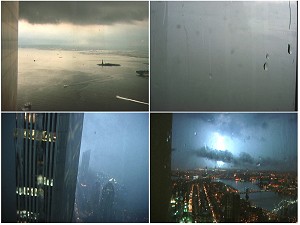 I was part of the WORLD VIEWS Studio program at the World Trade Center (LMCC), for three and a half months along with other 14 artists, we shared 1000 s/f on the 92nd floor of tower 1. On September 10th like any other day I set up my camera and recorded in time lapse images from the harbor , these images were going to be part of an interactive video installation I was working at the time (A_Maze). After the tragic events of the following morning, where artist Michael Richards lost his life, I decided to create this document in his memory. The film is five minutes long but the footage was recorded for almost seven hours it depicts an unusual thunderstorm from what it would be the last day of the WTC.

Monika Bravo was born in Bogota, Colombia in 1964. Since 1994 she has been living and working in Brooklyn, NY. In her work, she utilizes imagery, sound, industrial materials and technology to create illusions of recognizable landscapes and environments that examine the notion of space/time as a measure of reality. Her films, video installations and photographic work have been widely shown, recent solo shows include venues like Ciocca Arte Contemporanea in Milan, SITE Santa Fe in New Mexico, Mullerdechiara, Berlin and Dechiaragallery, NY, Tyler Gallery at Temple University in Philadelphia, Lehman Gallery at Lehman College in the Bronx. Numerous group shows at venues that include The New Museum of Contemporary Art and El Museo del Barrio in NY, Untitled Space in New Haven CT, Santa Fe Art Institute in New Mexico, Sala RG in Caracas, Museo de las Americas in San Juan de Puerto Rico, AboutStudio/AboutCafe in Bangkok and Espacio La Rebeca in Bogota. She has been a recipient of the Electronic Media & Film Award from the New York State Council on the Arts, both in 2000 & 2002 and has been part of art-in-residency programs at the Santa Fe Art Institute in New Mexico and the LMCC World Views at the World Trade Center.