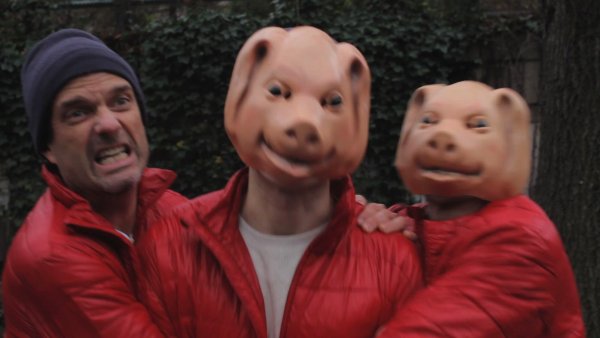 Jamie Block - a divorced stockbroker has-been who was once an indie-rock star signed to Capitol Records - meets Onur Tukel, a hapless middle-aged filmmaker who has just moved to Brooklyn. In this coming-of-middle-age story, Onur persuades Block to sink his money into a series of increasingly absurd music videos to promote his comeback as a musician. Desperate to impress his two beautiful, nonchalant teenaged daughters, Block casts them in the videos, which then play on multiple screens throughout this hallucinatory film. As tension mounts between director and musician Block's bank account and grip on reality dwindle. ABBY SINGER/SONGWRITER blends documentary and narrative with the lost art of the music video to tell the story of a comeback, a crack-up and a breakthrough.

Based in Brooklyn, New York, Onur Tukel has been writing, directing, and starring in independent films since 1997, when he made his directorial debut, House of Pan- cakes. As an actor, he's appeared in the genre-bending 2011 film Septien, the come-dic faux documentary Red Flag (directed by and starring Alex Karpovsky of HBO's Girls), and his own movies, Richard's Wedding and Summer of Blood. With his left-of-center sense of humor and knack for mining humor from everyday situations, the Turkish-American writer-director's own films have touched on sever- al genres, including horror-comedy in Drawing Blood (1999) and the 2014 Tribeca Film Festival sensation Summer of Blood. Interestingly enough, his two new mov- ies, Abby Singer/Songwriter and Applesauce will premiere the same week in separate cities. Applesauce will premiere at Tribeca film festival. And Abby Singer/Songwriter will premiere at Cimmfest. Tukel also writes and illustrates children's books.