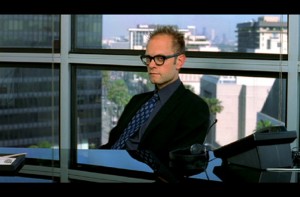 Inspired by the infamous Los Angeles Times-produced cinema trailers profiling different jobs within the film industry, LAUD WEINER* follows Lauden Weiner (David Hyde Pierce) from office to sound stage to star trailer in this 'behind-the-scenes' up close and personal look at the grueling, thankless work of a Hollywood manager-producer. Not!

After graduating from Vassar College and training at the London Academy of Music and Dramatic Art (LAMDA), Philip Euling worked in the theatre in Chicago and regionally for six years as an actor and director. A move to Los Angeles led to work reading hundreds of scripts and novels for agencies and production companies, including producers Sarah Pillsbury and Midge Sanford, the William Morris Agency, and Rysher Entertainment. He also worked crew-positions on features and TV movies, including jobs on the set of THE CABLE GUY, TALES OF THE CITY, and CANADIAN BACON, culminating in an associate producer credit on the feature film INFINITY. After serving as a production assistant, camera assistant, and director's assistant on so many other people's projects, Philip is glad to have made LAUD WEINER*, his first, albeit very short, short film.