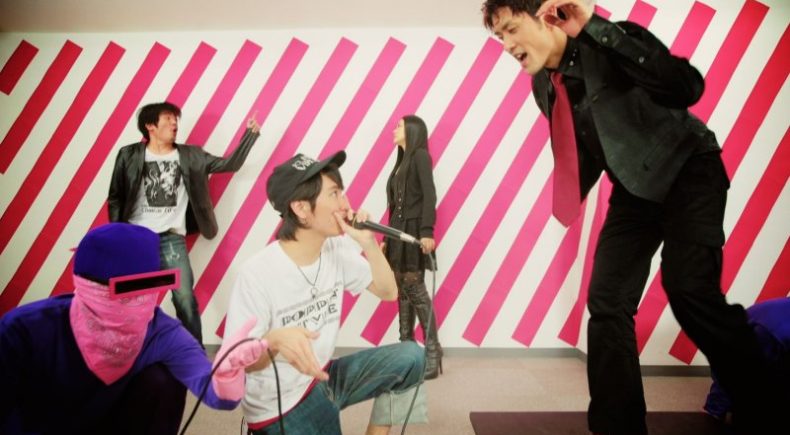 B&W Color. Silent. Omnibus film.[Episode01] A woman was waiting for a man in the cafe. It was their anniversary. But the man forgot about it, and he was delayed about 40 minutes. She got angry to him and told him not to smoke. He got irritated and they started to bicker.The man said something and the woman was filled with uncontrollable rage. Then, a group of people wearing purple suit with ski mask suddenly appeared and they started to make a stage in the cafe.And then, a tap dance appeared behind the woman and copied her expression and gestures while a beat boxer appeared behind the man and also mimicked his actions.

A longtime street dancer and performer, TOOWAII started VJing in 2002. Putting his unique background and funky sensibilities to work, this self-taught VJ and visual engineer puts on a show that leaves party goers wondering if the images themselves were dancing. His ability to move audiences has found him on stage alongside such artists as Smokin'jo, Hard Soul, Sergio Flores, Stephane Pompougnac, DJ Boris, Andy Caldwell, James Fierce, JT Donaldson, Michael Canitrot, Mitomi Tokoto, Akakage, Sugirumn, DJ Kawasaki, COLD FEET; and his ability to move freely across the borders of fashion, dance music, and culture has earned him calls from companies such as Bvlgari and Maserati to VJ their reception parties. Aside from his work as a VJ, TOOWAII is also in high demand as a media artist. He collaborated with respected film/music video director Hiroyuki Nakano on the 2003 documentary Spoken Word!, and debuted his short Chikyuu Wo Ai Suru 100 Nin ("100 People who Love the Earth") at the 2005 Aichi Exposition. His work also appears on the Evangelion Remix DVD. It was nominated as Finalist of Asian Top Fashionable Movie of The Year in Fashion Asia2013.