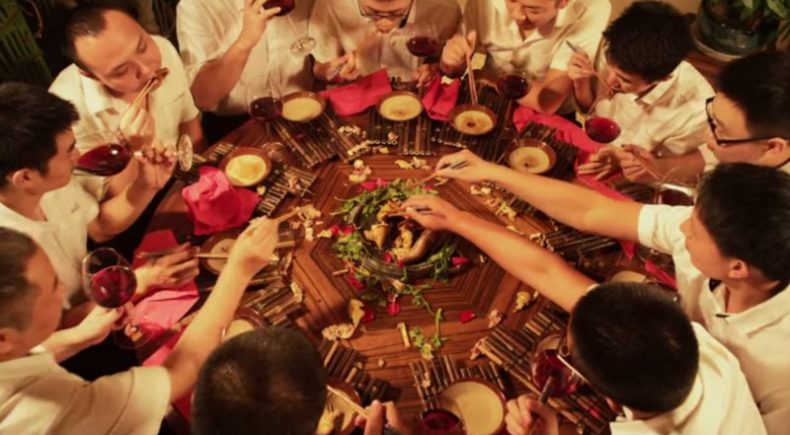 Eat Me is a student experimental film shot in Sichuan, China exploring the parallel world between a girl's reality and psychological state. In the real world, she is perceived as a God, but in her mind, she believes that she is being abused. By using metaphors and many Bible references like the twelve men as the twelve disciples and the last dinner, the film reveals the protagonist's inner struggle of the conflict between containing her social image and fulfilling her primary needs. The film establishes the contrast and the integration of worshipping and sexually abusing. As for "the good ones" in the society, what is really happening underneath their admirable appearance? Life is not easy, and life is not easy for everyone, including "the good ones".

Xiangtian Zheng is a student in New York University Tisch School of the Arts majoring in Film & TV concentrating on producing, and minoring in Business of Entertainment, Media & Technology. Xiangtian grew up is Sichuan, China, studied in Chicago, and now is living in New York City. He has directed and produced a lot of student projects and independent projects.

I came to the United States from China when I was thirteen. I started my sophomore year in an American Christian high school, and I am not a Christian. The school accepted me and said that as long as you were willing to learn more about Christianity, you were welcome to the school. The school was located in a small town in suburb Chicago, and it was apparent that a Christian bubble was built in the town. I learned a lot about different religions through those three years. However, life changed after I came to New York City, “the melting pot” according to the popular saying. Every street, every restaurant here seemed to be completely different from the shelter I was used to, and the best thing the city has taught me was to be as experimental as you want - you are an artist. I grew up in a small town in Sichuan, China, and I have gained a lot of expectations from my family as well as the people around me. I went to elementary school when I was only four, started college at sixteen and will graduate from college when I am nineteen. People called me “a genius,” and said to me, “you will be the next Ang Lee”. I appreciated all these positive comments, but I gradually realized that they ignored the fact that I am the same as everyone else: I have flaws, I am sinful, I have pain… People envision me to be “a cute smart Asian boy” all my life, but I want to be bad, want to be slutty, and want to break the rules. These are the sides of me that they do not see, and do not expect. But what can I do? This film means significantly to me because it gives me a chance to explore the conflict we have between our social image and what is really inside of us. At the end of the film when the manikin is floating on the water, it represents our everlasting image: someday it may float away that gets forgotten by the society, but it will never be drown even if the body is at the bottom of the sea.