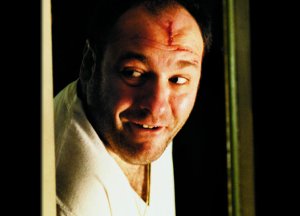 Bukowski meets Stanley Kowalski in the form of James Gandolfini's portrait of Vincent. Vincent is a blue collar "family man" of Italian decent who has a drinking problem and one painfully confusing morning. Delving into true darkness and wicked humor A Whole New Day spends a rough and tumble morning riding the beast that eventually pushes Vincent to come face to face with his own demons.

William completed his first full length film "A day at a Time" in 1992. The film received several awards. Since 1993 Mr. Garcia has produced and directed several award winning documentaries for a variety of corporate clients. His latest film "A Whole New Day" (wbff 2000) a dramatic short that he wrote and directed was broadcast on Cinemax.