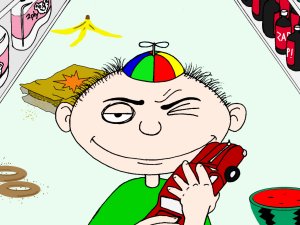 "Beat the Brat" is the first episode of "The Bill Johnson Show," a series of animated shorts by Mad Dog Films, Inc., written by Cevin Soling and Directed by Eli Kabillio. In "Beat the Brat," Bill Johnson teaches Bobby how to turn a shopping mishap into a brand new toy, in every parent's worst nightmare.