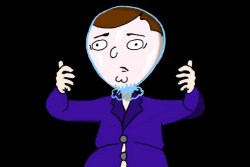 The Bill Johnson Show is a series of Animated Shorts by Mad Dog Films. In Voltron Bill Johnson shows Bobby a great way to start his mother's day with a laugh, by placing a plastic bag over his head. In Heroin Bill Johnson shows Bobby how to have a fun start to the family vacation, by placing sugar in a plastic bag, taping it to his body and revealing it as his parents' heroin just before going through the metal detector at the airport.