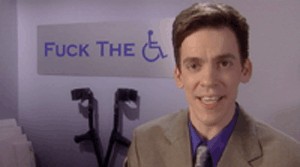 KEEPING IT REAL: The Adventures of Greg Walloch

"Keeping It Real: The Adventures Of Greg Walloch" is part documentary, part concert film and part traditional filmed comedy starring Greg Walloch. The film follows Greg, and his show "White Disabled Talent," chronicling his performances, his life and his daily trips to and from his apartment in Harlem. Greg stands out in his neighborhood for several reasons, not only is he white, he is disabled and walks on canes, but most striking of all may be the black leather pants, silver shirt and satin jacket he wears to his performances. Add to this mix the fact that much of Greg's material is based on his being openly gay, and disabled, and you have the makings for some of the most timely, provocative, honest and witty material in comedy. Greg Walloch's material examines society's often skewed perception of gay people and the disabled. The title of the Film is based on a true story in which a female friend of Greg's asks if he is gay because he's crippled and therefore women won't sleep with him. In his understated sarcasm, Greg admits that this absurd statement is true and tells his insensitive and simple friend that he has started a foundation called "Fuck The Disabled," for women who want to have sex with disabled men to keep them from the misfortune of becoming gay. Greg Walloch is as much a storyteller as he is a comedian, and his stories are translated to the screen in a unique fashion. Produced and directed by Eli Kabillio, for Mad Dog Films, Inc., the Film breaks the line between reality and performance, as the stories recounted in Greg's show are also dramatized in a smooth transition between stage and screen. With appearances by Stephen Baldwin, Anne Meara, Michael Musto and Deborah Yates as Greg's "friends," the film leaves the small clubs and theaters of New York and enters a new domain. Shot in a true wide screen DVCam format, accurately portrays the intensity of his struggle, the beauty of his spirit and the biting humor of his material. Politically incorrect, politically challenging and politically untouchable, Greg Walloch makes the viewer question the term "disabled," as this gifted performer pokes fun at religion, society, his friends and himself in "Keeping It Real: The Adventures of Greg Walloch"