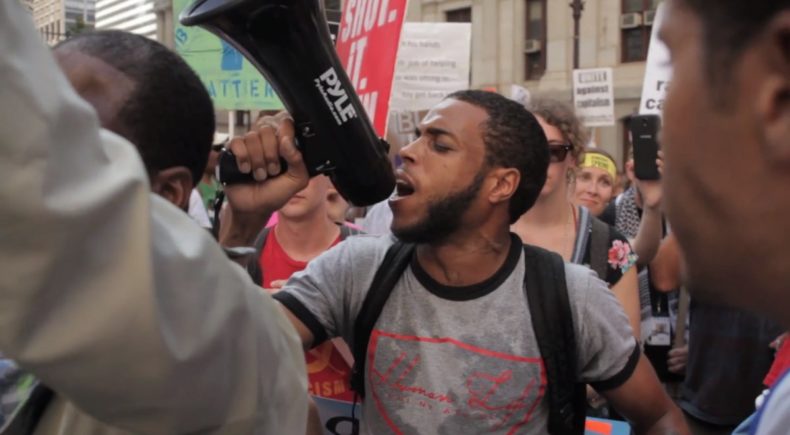 Filmmakers Hawley and Galinsky have documented protests in short form for over 30 years as observers rather than journalists or activists. Working without a specific agenda, the films, from the beginning, simply recorded events in a neutral manner. "Working in Protest" combines these films into a whole. The work begins in the Southern United States at a Klan rally that is seen at the time as a last gasp of White Supremacy. Shortly after shooting these photos, Galinsky headed to NY where he studied religion and sociology while playing in a band and making images that documented underground culture. He began to make films with Suki Hawley in the mid 1990's. Their first feature documentary focused on an underground publisher taking on GW Bush. This is when they began to shoot a great deal of footage related to protest. That film, "Horns and Halos," premiered at Rotterdman in 2002. While distributing their 2011 feature "Battle for Brooklyn," they began to document the Occupy Wall Street movement. This movement can be seen as a first indicator of the rise of populist outrage in the US. A couple of years later, they moved back to North Carolina with their kids. Within days of their arrival, they felt compelled to document the Moral Monday Movement which sought to highlight how North Carolina was slipping back towards racism. Over the next several years, they covered rallies celebrating the Confederate Flag, celebrating Trump, and more. At the time, they were concentrating on documenting these events with a sense of urgency- creating these shorts to give others a window into what was going on. When they started to share these short works with others, they recognized a connection between them and began to weave the films together as a feature. Through the passage of time, we observe that as much as things change, the more they stay the same. With the rise of Donald Trump things are not so different than they were in 1987.

Filmmakers Suki Hawley and Michael Galinsky have been collaborating with partner David Beilinson for almost 20 years. Together, they released the documentary Who Took Johnny (Netflix) - included in Art Forum's annual top 10 by John Waters who called it "an amazing, lunatic documentary that will leave you creeped-out, excited and surprised!" Prior, they co-directed the documentary Battle for Brooklyn (DirecTV), which was short-listed for the Academy Award in 2012. Also with Beilinson, they released Horns and Halos (HBO) - their first documentary feature to land on the Academy Award Shortlist. In the '90's, Hawley/Galinsky co-directed the narrative feature Radiation, which premiered at Sundance and went on to play at over 40 international festivals. In 1994, they made Half-Cocked, a film which combines aspects of documentary and classical narrative storytelling. It was praised by critic Manohla Dhargis, who stated, "Together, Hawley and Galinsky know how to make pictures shudder with feeling."

Political turmoil in the United States takes on a movingly personal approach through this judiciously edited archive of street marches and public demonstrations, shot since the 2000 Republican Convention by filmmakers Michael Galinsky and Suki Hawley. Weaving together the themes of race, power, and the media, the filmmakers offer an observational narrative of protest and activism while keeping a vigilant eye on the role of the police in protecting the targets of dissent.

The Directors Suki Hawley and Michael Galinsky will be available for Q&A after Sunday's screening.