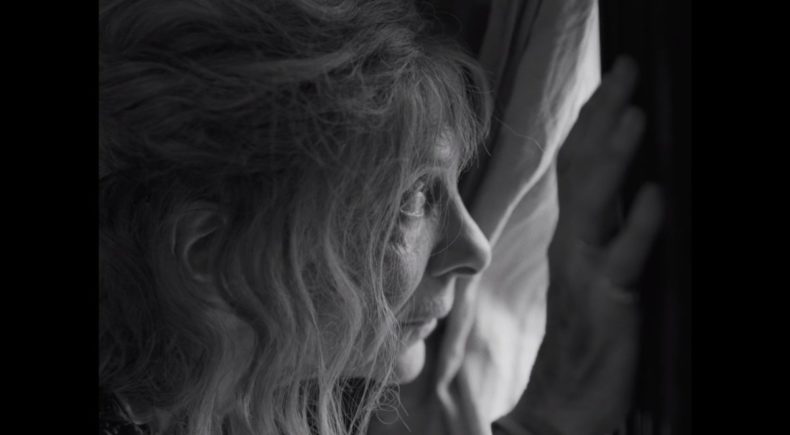 In a cinematic landscape in which there are few leading roles for women over 50, let alone 60, Saskia Rifkin's directorial debut "Can Hitler Happen Here?" breaks new ground by featuring a principal heroine in her 70's. Far from being an elderly female archetype Miriam Kohen (Laura Esterman) offers a daring character study of a vibrant, stubborn, individualistic woman intent on holding on to her home and iconoclastic lifestyle. A study of the oft noted fine line between madness and genius, the film allows the viewer a glimpse into the mind of a reclusive artist whose home has become both sanctuary and second skin. Scenes of chaos, both inner and outer, offer a tangible sense of what the world feels like for creative personalities whose shifting consciousness and unique perspective on life is paradoxically both their greatest asset and most challenging handicap. When meddling neighbors begin to take umbrage at Miriam's refusal to conform to social norms, an intricate and breathtaking psychological battle of wits and wills ensues. A brave exploration of geriatric female sexuality, the film does not shy away from this usually taboo subject but rather approaches it head-on. Sexuality, feminism, civil rights, privacy, mental illness, victimization and finally Fascism.

Saskia Rifkin, a director and producer, has over twenty years experience working in independent film, television, and contemporary art. For the past decade, she has partnered with the internationally renowned artist Gregory Crewdson to produce his critically and commercially successful, major photography projects. These include Beneath the Roses, a series that took nearly a decade to compete with a crew of over one hundred people (and was the subject of the 2012 feature documentary Gregory Crewdson: Brief Encounters.) Most recently, she produced his series Cathedral of the Pines, exhibited at Gagosian Gallery in January 2016. Saskia has also supervised the production of numerous films and TV shows for prominent producers and directors such as Mark Burnett and Abel Ferrara. A native New Yorker, she began her career by pursuing a degree in Film and Culture Studies at Barnard College; during that time she worked in the studio with seminal visual artist Robert Longo. Can Hitler Happen Here (2017) is her feature film directorial debut.

When I was initially offered the script for “Can Hitler Happen Here?”, I was totally knocked out by its originality. Firstly, Catherine May Levin, had written it while in her 70's, that in itself was exciting to me. Upon reading, I was thrilled to discover that Catherine had crafted a uniquely defiant principal character and truly uncommon storyline. Though the script is not directly autobiographical, the author is herself a wildly vibrant woman and free spirit who, like her fictional counterpart has also undoubtedly, throughout her own life, suffered from undue restrictions and outdated stereotypes levied on women. I understood immediately that in order to do the film justice as a director that I would have to call upon all my experience courage and creativity. Thankfully, having worked closely throughout my career with extremely intense archetypically masculine energies: Robert Longo, Abel Ferrara, Gregory Crewdson, I was able to easily understand, harness and externalize 'Miriam Kohen’s' somewhat hubristic inner fire. In this, my first feature film, I am honored to have helped bring to life an iconoclastic female character in her 70’s, the likes of which has never before been seen on screen. As a filmmaker and mother of 3 young children, it is also my hope that the film’s existence will enable a broader discourse about double standards and create disruption that could help audiences gain new perspectives on a variety of social issues.