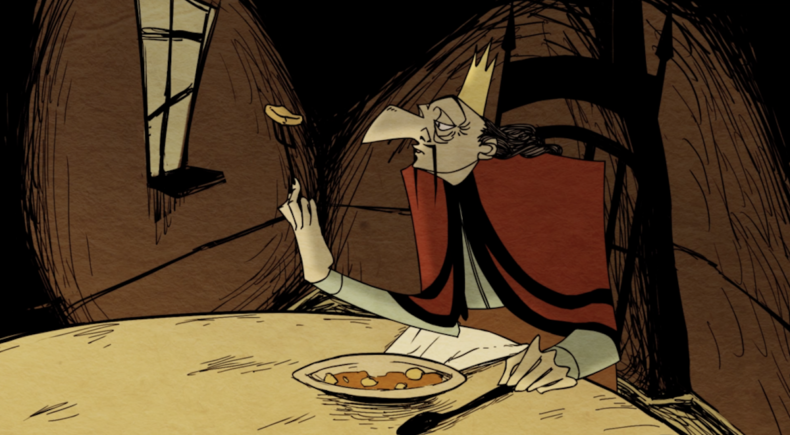 King of the House

A delusional man lives alone in a small dark house, believing that he is the king of the world and his supremacy is secure. However, his sovereignty is shaken by the arrival of a stranger. Little by little, this intruder occupies his living space, forces him to face his inner fears, cowardice and inferiority. Eventually, he realizes the great king he conjured in his tiny kingdom, is nothing but a pitiful tramp to the rest of the world.

Zige Zhang is a director and a storyboard artist. She is fond of telling metaphorical stories, and translating her life experience into fantasies. Although Zige likes to create animated films that are filled with theatrical pageantry, she believes they still have the power to make people feel empathy, as these characters play roles that are not so far from audiences' own experience.

Also, Zige is interested in singing and composing. She started playing piano at an early age and she has a solid foundation in music theory. Her long time engagement with music has led to her the especial interest of musicals and she just finished a musical animation King of the House.

This film is a portrait of a man in a stagnated mental state, which develops in many people. The "king" is afraid to go outside, and unwilling to accept new things, because he doesn't want to accept his true self. I believe that in order to protect themselves, people sometimes can be deceived, believing they are better off sealed away. Hiding from the disappointments of experience, they succumb to isolation.

I am interested in exploring the dark sides of human nature: the strong possessiveness over one's territory, and the fear for the unknown. I think these dark sides of the humanity are often connected with our insecurity, and I hope to illustrate human's reactions under these psychological circumstances through a humorous and ironic story.

To make this piece inline with the "kings" hallucinations, I used a dramatic, musical structure to tell the story. There are three musical songs in this film. I hope the expressionism visual style, and the strong color palette presents a dark and desperate emotional tone within an also humorous film.