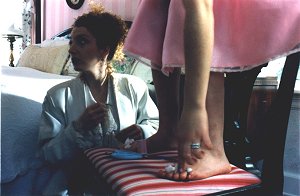 A sentimental comedy about what it means to become a woman. There is family, ritual and all the trappings of "femininity." On the other hand, there are boys--new and strange and fascinating. Lastly, there is one's own self-definition of growing up.

Jessica Sharzer is a native New Yorker, currently completing her MFA at NYU Tisch. In 1997, she completed a Masters degree in Slavic Language & Literature at UC Berkeley and made a swift escape from academia. She currently works as an editor of both narrative and documentary, and teaches various courses at the New York Film Academy. Her short film "Captivated" was screened at festivals in San Francisco, Berlin, and Montreal. Her feature script "Gromenko" was a semi-finalist in the America's Best competition in 1995. Jessica is currently collaborating on a feature script with colleague Sarba Das, a project they hope to shoot next year.