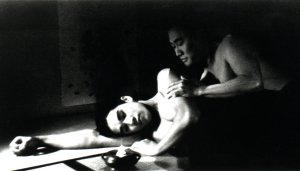 Inspired by The Young Man and His Death, a ballet choreography written by Jean Cocteau (1889-1963). "The Offering" is based on my personal grief over the premature passing of beloved friends - people who have left this world at the prime of their lives, before their full potentials were realized. "Their departure from my life also brought me face to face with my own mortality. As I entered middle age during the making of this film, I find myself questioning my own faith in life and confronting the ephemeral transience of youth and beauty, in this elegiac meditation on the nature of the passing of life and of love."

Paul Lee was born in Hong Kong in 1963, and moved to Toronto in 1976. Since 1991 he has organized and curated film festivals in Canada, U.S.A., Japan and Thailand. In addition to his programming activities, Paul also specializes in producing films for first-time filmmakers and in international co-productions. In 1994 he made his first short film Thick Lips Thin Lips, which has won eight awards, and was screened at over 100 film festivals worldwide after its premiere at the Berlin Film Festival. In 1995 he made his second film These Shoes Weren't Made For Walking, which has won six awards, and was screened at over 50 film festivals after its premiere at the Sydney Film Festival. The Offering is his third film.