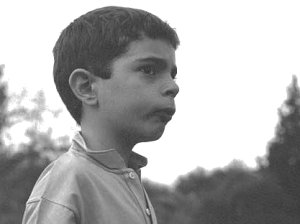 Son of a dream: vulgarizing Surrealism by practicing it. The subject of "Storie di Monelli" comes from an interview with filmmaker Joel Haertling and from the Voodoo themes of T.Alisch's S8 film serial "Angelika". "Storie di Monelli" was originally shot on S8.

Cane CapoVolto (Alessandro Aiello, Enrico Aresu, Alessandro De Filippo) was founded in 1992 as a kind of philosophical brotherhood. At first our work was closely linked to Super-8 imagery. Following this, we began working on the plagium-series, a project based both on found-information (found-signified) and on "cognitive dissonance". Later we began applying our studies to the form of the radioplay, which we consider an alternative to the moving image form. Cane CapoVolto has also produced two horne-video compilations in Italian, (we plan to publish a third one featuring some of the English language plagium), as well an 2 lectures with video programs: "intro" (about hard-core cinema) and "death comes at 24 frames per second" (about the documentary deviations and the "spectacle"). We cannot ignore the repressive function of "art" in a society, which desperately calls for creativity and abstraction to survive. Our work is a product of this awareness.