Latest News: Vision Films Acquires Worldwide Rights To​ Tango Shalom, 2021 BFF Best Screenplay, The Award-Winning Dance Comedy About Faith, Peace, and Tolerance. gets released theatrically. It will be available on VOD and DVD in October of 2021. 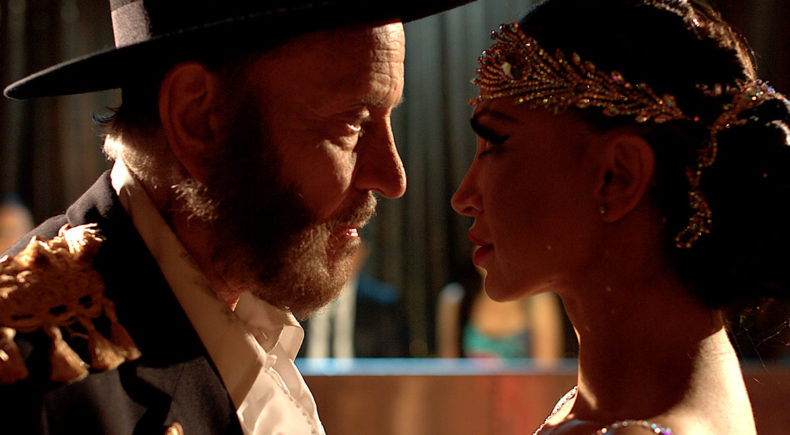 "TANGO SHALOM": Moshe Yehuda (Jos Laniado), a Hasidic Rabbi and amateur Hora dancer, enters a big televised Tango competition to save his Hebrew school from bankruptcy. There is only one problem: due to his orthodox religious beliefs, he is not allowed to touch a woman! At odds with his wife (Judi Beecher) and five kids, the Grand Rabbi (Bern Cohen) of his orthodox sect, and Moshe's entire Hasidic community in Crown Heights, Brooklyn, Moshe is forced to ask a Catholic priest (Joseph Bologna), a Muslim imam (Yasir Sitara), and a Sikh holy man (Hamza Zaman) for advice. Together, they hash out a plan to help Moshe dance in the Tango contest "without sacrificing his sacred beliefs"... setting in motion a fun, passionate dance movie. Heart-pumping and heartwarming, "TANGO SHALOM" tests the bonds of family and community, and the bounds of tolerance and faith. One dazzling dance step at a time "TANGO SHALOM" is an inspiring and joyous celebration of Hasidic Jewish life.

An interfaith milestone, this is the first film in history that was a joint collaboration with The Vatican, a Hasidic Synagogue, a Sikh Temple, and a Mosque, which promotes a timeless message of peace, tolerance, and understanding.

Before Gabriel Bologna’s career as a writer/director, he was an accomplished actor for fifteen years, working with such film directors as Francis Ford Coppola and Mark Rydel. He was discovered by James Burrows while attending New York University Tisch and was flown out to Universal Studios to star in the ABC series, “The Marshall Chronicles”, where he played loveable tough guy, Jonny Parmetko. The New York Times reviewed Gabriel’s role as “a brilliant Fonzi redux specimen”. Though it only ran a season, the show has been immortalized on Wikipedia as being the impetus for Larry David changing the name “The Seinfeld Chronicles” to “Seinfeld” as to not compete with Gabriel’s show which had been launched at the exact same time. Gabriel co-wrote an autobiographical comedy called “Love Is All There Is” (Samuel Goldwyn) with his parents, screen legends Renée Taylor and Joseph Bologna, starring Angelina Jolie. Bologna wrote and co-directed the film “The Elevator” for an HBO Original Release, starring himself, Martin Landau, Martin Sheen, and Richard Lewis.

Gabriel directed a horror film called, “The Black Waters of Echo’s Pond,” starring Robert Patrick, Jimmy Duval, and Danielle Harris, which was released by Anchor Bay. In 2014, Gabriel directed a film adaptation of the play “African Gothic,” by Reza De Wet, South Africa’s most celebrated author. Written in 1985 at the height of censorship, this masterpiece was an instrumental weapon in the literary war that toppled Apartheid. The story, itself, centers around a weapon: the Sjombok, a long flesh-tearing whip, the ubiquitous symbol of Apartheid, and synonymous with the oppression by those who wielded it. The film won over a dozen film festival awards. Gabriel directed a dance/comedy in Brooklyn, NY called “Tango Shalom”, about a Hasidic rabbi who struggles with his orthodox beliefs to realize his dream of dancing the tango. It is produced by Joel Zwick (”My Big Fat Greek Wedding”), starring Karina Smirnoff (longest running Alumna on “Dancing With The Stars”), and Lainie Kazan (”My Big Fat Greek Wedding, 2, and 3”).  Gabriel is also developing a food show with Ross Babbit, who founded “Anthony Bourdain: No Reservations” at the Travel Channel, and TV personality Jack Maxwell.

Aside from studying at NYU Tisch, Gabriel was under the tutelage of auteur, John Frankenheimer, and opera impresario, Albert Innaurato. Gabriel was a professor of filmmaking for ten years at the UCLA Extension Entertainment Studies Department. Jon Levin, who ran CAA for thirty years, is Gabriel’s manager.

One dazzling dance step at a time "TANGO SHALOM" is an inspiring and joyous celebration of Hasidic Jewish life. An interfaith milestone, this is the first film in history that was a joint collaboration with The Vatican, a Hasidic Synagogue, a Sikh Temple, and a Mosque, which promotes a timeless message of peace, tolerance, and understanding.