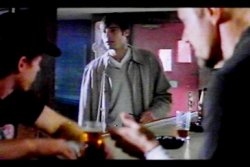 Bill's Seat is a psychological thriller about a young man who stops in a small town with a flat tire only to be trapped in the local bar and accused of being a hit and run driver from a previous accident. Just as it appears he will not get out of the bar alive it is announced that his car is ready and he is free to go. It has all been a joke. Or has it?

Karl attended NYU grad film school where he directed several shorts including Elysian Fields, which won a Gold Award at WorldFest Houston. Karl also directed a short play for Atlantic Theater Company. He studied acting under Fred Kareman and with The Barrow Group in New York. In addition, Karl works as a storyboard artist on many prominent movies and TV productions.