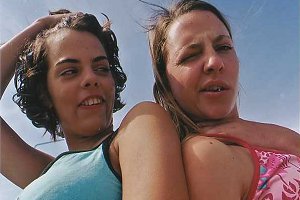 On a hot summers day two teenaged girlfriends skip school and escape boring suburbia by playing a special game: they ride in cars with men and try to humiliate them by using pornographic language. Both feel invincible and think they can always count on each other. Then they meet Horst, a driver who is an equal match, and their harmless game takes a terrible turn as their vulnerability comes to the surface. Suddenly their friendship is exposed to more than it can bear.

Birgit was born in 1971 in Cologne, Germany. From 1990-93 she worked as a waitress in the Philharmonic Hall in Cologne, while acting at the Cologne Fringe Theatre. From 1993-96 she was a student of Film and Drama at Reading University, where she received her Bachelor of Arts. She also taught German at a London Language School for managers. Since 1996 she has been a student of Directing at the German Film and Television School in Berlin. She has been working as a reader for film production companies, since 1998.