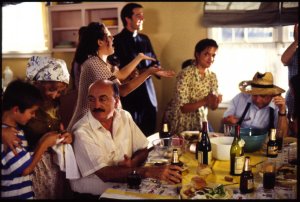 WHAT REALLY HAPPENED DURING THE CUBAN MISSILE CRISIS

At the height of the Cuban Missile Crisis, in a one-bedroom apartment in Little Havana, Miami, Cynthia, a single mother tries to toilet-train her distracted 2-year-old son Spencer. She is interrupted by her Cuban neighbors, Socorro - a mother of five, and Gabriel - her henpecked husband, who want to watch the growing crisis on her TV. Reluctantly Cynthia agrees, until Socorro, unable to concentrate on the crisis, insinuates herself into the bathroom to "help". More people come over and soon enough, the bathroom is filled with Cuban and American neighbors who all join in a combined effort - to get Spencer to go to the bathroom. One thing leads to another, until Cynthia has found a new family, Gabriel gets a couple of things off his chest, and Spencer learns to express himself at his own pace.

Charles lived in Brooklyn for fifteen years, and worked as a Gaffer and Cinematographer with Stanley Tucci (Big Night), Abel Ferrara (Bad Lieutenant) and Julie Taymor (Oedipus Rex). He later attended AFI's graduate program where his script for "What Really Happened..." was awarded the 2001 Martin Ritt Fellowship, and was published in AFI's "Short Form Anthology". Charles is currently co-writer and director of Rebel Planet's buddy comedy, "Playas From The Himalayas", executive-produced by Robert Townsend. He lives with his family in Los Angeles but he misses home.