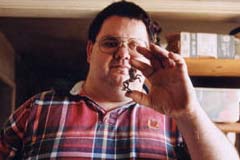 A boy posts a message on the Internet seeking a suicide partner. A girl reads it and flies to meet him one week later. Together they jump off a 600-meter cliff. They found each other on an Internet newsgroup called alt.suicide.holiday, or ASH. Internet newsgroups are virtual discussion forums amongst people with common interests. The subject of this one is suicide. You come across thousands of letters. The unknown leave behind their open hearted life stories for us to read. Who are these people and why are they seeking each other on the Internet? What lives lay hidden behind the blue light of the computers. In ASH worlwide suicide we meet four writers of this newsgroup.

Walter Stokman (1966) Studied film at the Art Academy in Breda, the Netherlands. In 1994 he debuted with a film about a search for Sly Stone, a 70s American funk pop star, "Let Me Have it All." In 1997 he made "Can't U Hear me Singin." This personal tribute to black pop music features musicians like Ike Turner and Swamp Dogg. Throughout the years Walter Stokman has made several short documentaries for Dutch television.