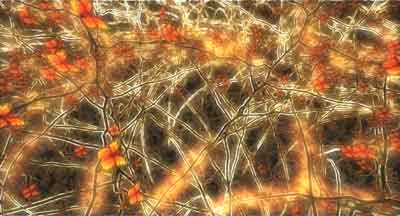 Butterfly is a journey from life to death and back. It is a kaleidoscope of colour, sound and movement that lies somewhere between art and entertainment, speaking eloquently and subtly of the cycle of life and the transience of the moment. Nothing lasts forever but there is always hope in beauty, form and harmony.

Glenn Marshall is an animator and composer with unique experience and expertise in computer graphics and digital technology. He worked for two years in the Nerve Centre in Derry on the King's Wake a half hour animated tale that won the best animation award at the 2001 Celtic Film and Television combining cell animation with CGI. He moved to Belfast in 2000 and began working with Dream Ireland Ltd an organisation that develops local talent in the creative industries. From this new base he was able to develop ideas that communicate a unique creative and philosophical vision through music, animation and film. Summer 2002 sees the completion of two projects for the Irish Film Board, Butterfly and Mannequin. Both these films deal largely with computer-generated imagery overlaid with soundtracks composed in C Sound. They represent a remarkable creative fusion for one person dealing as they do with layers of programming, 3-dimensional design, video effects and music combined in a complex structure of narrative, harmonics and philosophy.