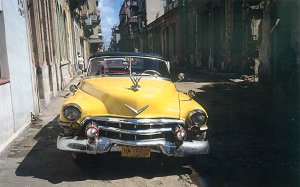 "Shanghai Rumba from Cuba" is a major link in the work of filmmaker and artist Henri Plaat (Amsterdam 1936), who made about forty short films. The Shanghai Rumba fits into Plaat's series of 'travel documentaries without a narrative line' that he made alongside surrealistically tinted films. In these travelogues, the boundaries between film and visual art have disappeared. In his films, Plaat emphasises the autonomy of the visual material in a poetic way. This can be seen in e.g. 'Spurs of Tango' for which Plaat was given a Golden Calf in 1981, 'Moroccan Light' (1995), and 'Luz Y Sombra' (1989). The mood in Plaat's oeuvre, which he describes as 'the beauty of decay' is shaped in the travelogues by the often fixed camera standpoint, as a result of which landscapes, people, animals or objects pass the eye in a stream of sometimes hallucinogenic images. Thus, the sequence of images, the precision of the framing and the frequent and subtle use of music play a major role. In 'Shanghai Rumba from Cuba' (shot in 1991), Plaat takes an important step. For the first time, the colour is no longer a chance element in the film but the protagonist. Plaat allows the ordering of the Cuban shots in the film to be decided by the colour itself. Images of streets, roofs, Jugendstil and Art Deco buildings, people and old cars express their past in scintillating and melancholy gradations of colour.

Henri Plaat (1936), is an artist and filmmaker, working and living in Amsterdam.