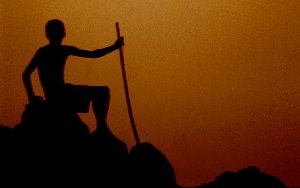 In a land under the sun, the moon has risen. On an ocean-side cliff, a young boy awakens to his destiny. Distant figures, rhythms, and chants draw the boy from his dream-state perch. He sprints down the darkened path toward the circle of silhouettes. Through the brush, he spies souls engaged in acrobatic dance and martial art. A pastime of slaves, once outlawed, has emerged as a powerful and deceptive art. The boy has fallen under capoeira's spell.

Growing up in the third world and supplanted in the first world at a young age, writer/director Dean Davis' work represents his Island to Babylon experience. His childhood attraction to mythology has painted his interests in history and human destiny and drives his need to create. As a young boy in Kingston Jamaica, Dean grew up under the influence of the wild west cinema. Always identifying with the rebel, and never the sheriff he was hooked on one day writing his own endings. Armed with a cinematic mission to accomplish, and a life long study of the craft, Dean is set to take aim at the big screen and the shaping of our modern day mythologies. His short Warriors at Play, a mythical tale of a young boy who witnesses a glimpse of his destiny, was purchased by Bravo! NewStyleArtsChannel.