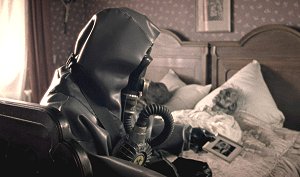 The 26th day after the disaster. Two survivors in life suits are looking for other survivors, as they run out of gas on a remote country road....

Born 1974 in Oelde, Germany. After graduating high school he worked as a 3D-artist for several Playstation and PC video games in Darmstadt, Manchester, and Hamburg. Since 1999 he has been studying at the German Film and Television Academy (DFFB) in Berlin.