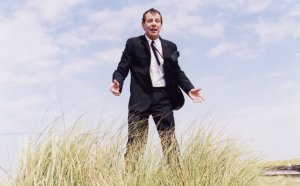 Leon, 10 years old, lives with his mother but he often sees his father and there is a strong bond between the two of them. A story about a happy and fulfilled child who feels the threatening shadow of death coming.

Jean Berthier lives and works in Paris. He studied philosophy for five years, after which he took the entrance exam for France's national film school. Today, Jean has three feature films in development, including a feature length version of SAME PLAYER, SHOOT AGAIN.