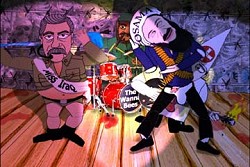 In this animated short, the alarm is sounded to beware of the "True Believer." It blends humor with its stark observations of fanatics past and present

Dave holds a B. F. A. in Oil Painting (Old Master Techniques) and studied Graphic Design for a year before discovering the joy of animation in an intense summer program at The Animation School. After school he was able to work in animation and since 1992 he has been the Creative Director at Animatus Studio. He has written and directed three "Derf the Viking" cartoons, which are available on DVD. He has created seven independent films, called Fresh Toones. They have been shown in many festivals around the world. "Sal Monella's Deli" "The Secret Life of Little Ricky" and "True Believer" were all trophy winners at the Rochester International Film & Video Festival and were included on their Best of the Fest video. His films have been broadcast on WXXI-PBS and shown at the Memorial Art Gallery in Rochester, NY.