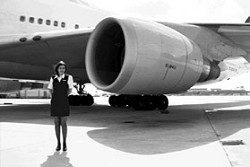 ME MYSELF AND THE UNIVERSE

Man and gravity: A classical tragedy. The individual's struggle with his self and the overwhelmingly complex structure of the universe. A stewardess, an excavacator driver, a furniture salesman and a millionaire speak about one object that they dedicate themselves to with passion. They demonstrate which precautions they take so that the events of life don't turn into accidents. Seat bags, remote controls, copy enlargements and a grave for a million. They all carry the treacheries of the universe

Born in 1970, living and working in Cologne, he studied Camera at the University of Applied Sciences. He learnt from well-known german lmmaker Adolf Winkelmann and also well-known german DOP Axel Block. After he has passed more than a year in Japan, Tokyo, he studied in several other foreign countries, i.e. Film and Television Institut of India, Anthology Film Archive New York. His working experience as a DOP includes China, Russia, Chile, Northern America, all across Europe, India. ME MYSELF AND THE UNIVERSE is his debut in directing.