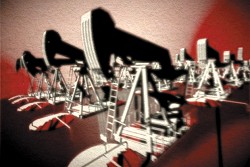 An un-apologetic criticism of US foreign policy and The Project for the New American Century. Animation follows the dialogue, giving visual poignancy and weight to Barry's words. The propoganda-esque style of the motion graphics further re-inforces the message. Is this a conspiracy theory? Far from it.

Simon Robson moved to London in 1995 having completed his bachelors degree in French and Politics at Aston University, Birmingham. Simon moved South with the intention of becoming a musician and signed recording artist. After 4 years of adventure in the city, musical success was thin on the ground. Around the end of 1999 Simon decided to switch direction and start a graphics and digital media course at Ravensbourne college. Simon's interest in graphics and animation quickly developed and by 2001 he was a freelance animator and designer working with various design houses in London.