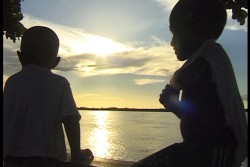 ON THE TRAIL OF THE CAT

In the north-east of Brasil the "fazendas" look for workers to knock down hectares of Amazon forest. For this purpose they use a foreman called "the cat". Those who follow the cat will not find the promised money but a debt which cannot be paid off and a contemporary form of slavery. The documentary is a tale and a journey amid the exploiters (Brasilian and multinational companies) the exploited ones and those who fight.

Andrea Caccia Born in Novara in 1968, Andrea studied film and painting. He currently lives in Milan.
Vittorio Moroni After his studies in philosophy and film theory, Vittorio received a Master in film from Universal Pictures.