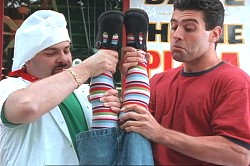 "Hic!" follows a five-year old Asian-American girl through her ethnically mixed neighborhood as she tries to find a cure for her hiccups. Through comic scenes and montages with deli owners, restaurateurs, friends, and neighbors, the protagonist is offered many different cures for the hiccups. Ultimately, the most basic solution is the one that works.

Koyalee Chanda is a three-time Emmy-nominated director based in Brookyn. She has been the primary director on Nickelodeon's hit series Blue's Clues for 5 seasons, having directed many of the program's primetime specials. Additionally, Koyalee has written and directed 2 short films and a documentary about arranged marriages in her family. In 2002, Koyalee was commissioned by Nickelodeon to write, direct and produce "Hic!" for Ragdoll Productions' series "Open a Door."