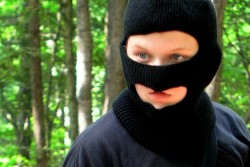 THE CLIMACTIC DEATH OF DARK NINJA

A frazzled auteur struggles to keep his lead actor, avoid heat stroke, and weather creative differences - all while attempting to shoot his movie's climactic final scene. A mannequin, four ninjas and a five year old lost in the woods aren't making it any easier.

After surviving film school, Peter started his own production company, Spaceman X, in 2000, and has worked to produce a great portfolio of independent shorts. Peter's work has been shown in festivals across the country. Peter recently won a $25,000 Grand Prize in the Travelocity "Director for a Day" Competition and is now developing his first feature.