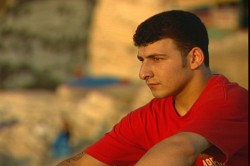 In 1993, the filmmakers met five kids. Four Palestinian refugees and one Lebanese boy. Like kids everywhere, these youth in Lebanon were looking outward at their world, looking for a future. At the time, many people around the world were celebrating the signing of the Oslo Peace Accords between the Israelis and the Palestinians that was supposed to signal a new future for youth in the Middle East. As pre-teens, the Palestinians in the film, played, lived and dreamed in Shatila, a refugee camp in Beirut. They are the third generation of Palestinian refugees to grow up in Lebanon. The Lebanese youth, Hussein, lived just outside the Israeli occupied zone in South Lebanon and explained how the Israeli shelling of his region made it hard to study and go to school. In 1999, 2000 and 2002, we searched for these same youth as they were entering adulthood. They still live in Lebanon, a country that on the surface has changed dramatically. Cranes and rebuilding dot the horizon. However, we see through the stories of the youth in our film that very little has really changed. The youth in this film obsess about girlfriends and boyfriends, fight with their siblings and dream of the future. Yet these dreams are nurtured against a backdrop of history and politics that they can’t wish away.

A native of Iceland, Hrabba Gunnarsdottir has been working in film since the late eighties. Besides directing, Hrabba has worked with Lyn Hershman, Tom Shepard, Mark Huestis and others. Tina Naccache has been a human rights advocate in Lebanon for many years. Erica Marcus, an American Jew has been working in film for the last twenty years. Besides directing, she has worked with King Hu, Ulrike Ottinger, Trinh T. Minh-ha and others.

Directors Hrabba Gunnarsdottir and Erica Marcus will be available for Q&A after the screening.This screening is supported by: