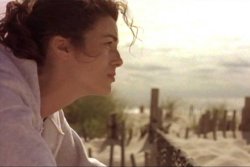 EVERYTHING FOR A REASON

When Manny Papadopoulos, a young aspiring writer, meets Eve Stephanopoulos, the girl of his dreams and a virgin to boot, he adamantly believes that getting into a serious relationship will derail him from his dream. Teddy, Manny's best friend, who will do anything to get back together with his ex-girlfriend, Jenny, eases Manny's concerns by pointing out the many pros of the 90's Virgin and dismisses any commitment fears Manny has by posing the question: How serious can things get with a virgin?

Vlasi studied theater and television production at Villanova University. Upon graduation he wrote, directed, produced and starred in the short film Across the Sea (1995) which played in several domestic and foreign film festivals. While studing with John Eyd (member of the Actors Studio) and working on various projects as an assitant director, Vlasi wrote Everything For A Reason. The film marked his debut as a feature film writer/director/actor. He is currently studying acting in New York with Bill Esper and writing his next script.