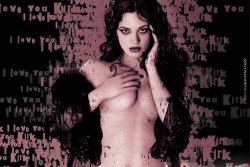 Anna Battista, a young actress idolised by her adoring fans as their Scarlet Diva, lives for the demands of her career. Her agenda of public appearances, awards ceremonies and screen tests sweep her on an endless circle of inhospitable cities and loveless adventures. Yet Anna longs for innocence and purity. Her desire is unexpectedly fulfilled in Paris, when she meets Kirk, an Australian rock singer on tour. Hopelessly in love, Anna discovers the stirrings of a strange new feeling, a sensation of loving tenderness and sharing, where once she had known only violence and indifference.

Asia was born in Rome, the daughter of Dario and Daria Nicolodi. She started her acting career when she was nine years old. Since then she's been in over fifteen movies and she has won two David Di Donatello awards(the Italian oscar). She has acted in French in La Reine Margot and in English, in the upcoming B. Monkey where she plays Beatrice, the lead role.