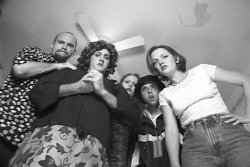 It starts out at a frantic pace with the miserable Leon, a thirty-year-old paper boy, who talks to Jesus and still lives at home with his unstable mother and dope-addicted brother, Anthony. He's certainly looking for a miracle and is willing to take a leap of faith to get one when he receives a mysterious letter written in Polish from Henry Zabriski, a crazed customer along his route. When Zabriski, who it turns out has a long criminal record, commits suicide, Leon and Anthony are led back to their estranged and evangelical brother, Gary, who just happens to be able to translate. Prodded on by the letter's promise of hidden fortune buried "under stone," the brothers set off to find the letter-writer's heirs, only to discover a family as one-of-a-kind as their own. Sheila is the rock of the trio, the caretaker of her Tourettes-struck sister Meredith who attempts to escape and disguise her barking and swearing vis-à-vis the crack pipe, and their mother who has spent her last years in a sleeping beautyesque trance, her own dark secrets locked away. The brothers make camp in the Zabriski household and discover that stone is actually, Stone, the name of the girls' long-dead brother. You can only imagine what happens from here, when God, money and family madly intersect. It's a wild, frenzied ride, and no one emerges unscathed. But beneath this turbulent and uproarious plot lies the more dark and teeming story of each character's struggle for connection in a hysterically bleak world.

Roger Majkowski graduated from SUNY Purchase Film in 1991 and has worked for a decade in the film industry. While toiling away as a producer and writer on other people's projects, he was secretly plotting a feature of his own. In 1999, a group of his colleagues got together and decided to make a feature. The formula was simple: you don't need a whole lot of money to make a movie. The collective decision was to concentrate on character and performance while at the same time using the tools of traditional filmmaking. Exploiting the free aspects of the process - in this case the script, the cast and the rehearsing - were to be the main focus. Working without funding became a challenge that all involved with the project rose to meet. It was shot over two weeks on Long Island and the cast, crew, locations, props and equipment were almost entirely donated.