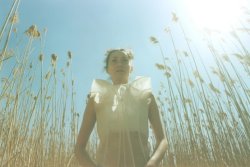 17.17 is a short film that encompasses an epic love story, fantasy, and martial arts. The story revolves around a woman's search for a mythical hero. The journey takes her vast distances and along the way we learn more about the world she lives in, as told through poetry and music.

Chinese director Alexi Tan was born in Manila, Philippines. During a stint in London, he learned the basics of photography, later moving to New York where has since contributed to numerous international publications, including i-D, Interview, Dutch and Visionaire. He is currently working on his second short to be shot in Asia.