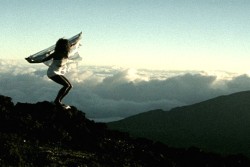 We follow the task of a beautiful angel as she guides two lost children from a dark world of industrial confusion into a natural paradise. This metaphorical modern fairy tale cries out above the roar of progress for a breath of fresh air.

Michael was born in Montevideo, Uruguay in 1969. He's been doing worldwide advertising campaigns for the past 10 years such as jpmorgan chase, danone, cocacola, panasonic, clorests. His first short rescue opens a new door in his carreer as a film director.

Director Michael Abt, Producer Muriel Hurtado and Cinematographer Thomas Marvel will all attend the screening.