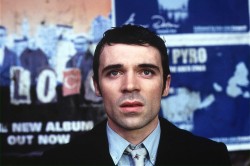 'Headrush' is a crazy, contemporary, black caper/crime comedy about two stoners, Charlie and T-Bag, who hope to solve all their problems by working for a notorious Underworld Criminal, The Uncle. Charlie's been dumped by his girlfriend Vicky and been cut off by the Social Welfare. The boys hear through their dealer Blowback that The Uncle is looking for new drug mules, so Charlie conceives an elaborate scam to smuggle a consignment of Cocaine back from Amsterdam. As they lay their plans, each one egging the other on, each one refusing to admit to any fear, a series of comic coincidences begin to unravel their carefully laid plans. The proverbial 'fish outa water' story, 'Headrush' is a finely smoked blend of action and adventure, comedy and drama, all rolled together with the best of cinematic ingredients, providing a truly memorable movie high !

Already compared to Tarantino and Kubrick, Shimmy Marcus's career began with a Miramax Award for his debut script 'Headrush'. His debut short '7th Heaven' won awards at various festival as did his cult hit documentary'Aidan Walsh - Master of the Universe'. He is currently working on a documentary on James Joyce's 'Ulysses' while accompanying his feature 'Headrush' on the festival circuit.