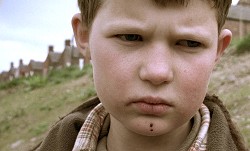 Set in 1970s Salford, England. Amidst a forgotten landscape of decaying half demolished post war slums; 10-year-old Alan and his family make their way to the clinic for Mum's regular injection of Largactil, a torpifying drug intended to subdue her 'schizophrenic' inner voices and visions. Alan takes upon himself the responsibility for holding his family together. He negotiates the two worlds his family inhabit: his mother's vivid inner world occupied by demons and angels, and the stark reality of everyday life haunted by poverty and the ever-present threat of the social services splitting up his family. To others Alan's family is a world of 'spazos', of madness, neglect, and eccentricity - a dysfunctional family. To Alan, it is his family. Shot on the Langworthy estate in Salford England in 2003. Talking With Angels introduces a young and talented largelly untrained cast drawn from the local area and also utilises the skills of local people alongside professional film technicians. Talking With Angels is a semi autobiographical story based on director Yousaf Ali Khan's childhood in Salford. Yousaf said one of his intentions in making TALKING WITH ANGELS was to confront perceptions and prejudices about what constitutes a viable family. 'Challenging the fictitious idea of 'normal' by stigmatising anything that does not neatly integrate into it, on this occasion the so called, 'disabled', 'mentally ill' and 'dysfunctional family' are re-occurring themes in my work'.