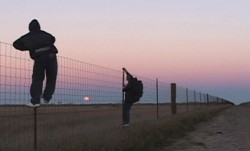 Mojados: Through the Night is an eye-opening documentary filmed over the course of ten days that follows four men into the desperate world of illegal immigration. Alongside Bear, Tiger, Handsome, and Old Man, director Tommy Davis takes a 120 mile cross-desert journey that has been traveled innumerable times by nameless immigrants who – like these four young migrants from Michoacan, Mexico – all had the simple, American dream for a better future. Davis brings to life the often unheard hopes and stories of these migrants as their dehydrated days evading the U.S. Border Patrol turn into sub-zero nights filled with barbed wire, brutal storms and the ever-present confrontation with death that is reality for the tens of thousands of illegal immigrants who make a similar journey into the United States every year.

Tommy Davis was born in McAllen Texas in 1978. He studied business at George Washington University and worked during his summers for Artisan Pictures, Jersey Films and Miramax Films. He has written and directed several short fiction films. Mojados: Through the Night is his feature film.

The director, Tommy Davis, will be available for Q&A after the screening. Assistant editor Luis DeLeon will also be in attendance.