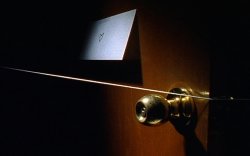 A broken relationship, a shotgun and a long piece of string. Could this be the perfect revenge? Shot in the style of Hitchcock's Rope.

After successfully pulling himself free from the undeniably strong tug of the Advertising Black Hole, Kevin Watkins has launched a career as a filmmaker. String is the first evidence of this fact - subsequently followed by an adaptation of a Dorothy Parker short story.

Cast and crew will be available for Q&A after the screening.