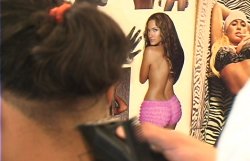 Dee-Dee, a Brooklyn barber, covers his wall with magazine cut-outs of women. He wishes that real women could look more like the images on his "wall of beauty." However, when Dee-Dee is introduced to the art of photo-retouching, his perceptions of beauty are called into question. Wet Dreams and False Images uses humor to raise serious concerns about the marketplace of commercial illusion and unrealizable standards of physical perfection.

Jesse received an MA in documentary film and gender studies from NYU. She has directed, produced, field produced, and filmed documentary projects nationally and in Africa, India, and the Netherlands. She founded a youth video program in Manhattan's Lower East Side. Jesse has also worked with the International Rescue Committee and Global Action Project to produce film projects with refugee youth, and recently lead the Sundance Institute's Reel Stories documentary film lab for teenagers.

Director Jesse Erica Epstein will be available for Q&A after the screening.