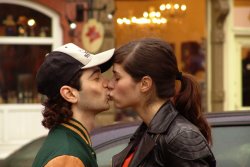 Kebab Connection is a crazily comedic tale of two fast food stands (one Turkish, the other Greek), a frustrated filmmaker, the coolest commercial of all time, intercultural love, forbidden romance and centuries-old Aegean rivalry. And we mustn't forget the local mafia, either! The young Turkish hip-hopper Ibo wants to make the first German kung-fu film, so he practices by making an extremely successful commercial spot for his uncle's kebab stand. Everything seems to be going his way until his girlfriend tells him she's pregnant ... His girlfriend leaves him and his parents kick him out of the house. His uncle promises to help him patch things up with his parents, if he'll make another commercial for him. But this time, the second spot is a flop. Frustrated, he gives in to the temptations of the rival Greek restaurant-owner across the street (and his beautiful daughter!) and agrees to make a commercial spot for his uncle's worst enemy. Once the mafia gets involved, Ibo can finally put his kung-fu talents to the test.

Anno Saul (Bonn, 1963) studied at the Jesuit College for Philosophy in Munich, followed by studies from 1985-91990 at the Academy of Television & Film, also in Munich.