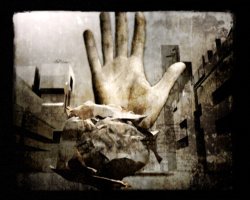 OMR - THE WAY WE HAVE CHOSEN

A ruffled sheet of paper is projected in a labyrinthine city made of typography. The ball tries to cut through a path in this universe inhabited by papers moving like a compact crowd. Hands indicate directions or prohibit the passage. They want to force the ball to follow a straight path. But its single, crumpled aspect contains a secret: that of its individuality...

Born in 1976, Stéphane Bève (SpoN) graduated in Images and Sound Ingeniering in Valenciennes (France). He works then as a 3D graphist on advertisments and music videos as "Flowers" by Emilie Simon, "Yallah" by Callogero, "Take me dow n" by New Found Glory, "Au Pays de Ghandi" by MC Solaar, "revolution.com" by No One Is Innocent and for the short film "Obras" by Hendrick Dusollier.
Born in 1981, Mathieu Auvray (mAt) graduated in audivisual at Montaigu (France). From 2002, he works with nO brain on the compositing for TV channels (Canal J, MCM, HBO) and on the compositing 2D for several music video: "Pray" by Syntax, "Flowers" by Emilie Simon, "Le Prince Bleu" by Robert & Majandra, "Sexual" by DSL, "Au Pays de Ghandi" by MC Solaar and "revolution.com" by No One Is Innocent.