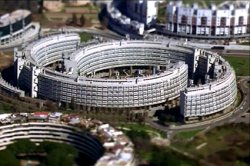 A great photographer films Rome from a helicopter and transforms it into a city never seen before: a temporary installation, where center and suburbs, structure and infrastructure, seen from above, appear as a big scale model. A voyage of knowledge and discovery in which hierarchic relations, in terms of size and importance, are imagined in an original way. The vision from a flying object of which only its shadow and sound are perceivable. SITE SPECIFIC_ROMA 04 is an artistic project, a work in progress, the first stop of a voyage which will involve, after Rome, Shangai, Pompei and Las Vegas.

Olivo Barbieri (Italy 1954) begins to exhibit his work in 1978. Beginning in the year 1989, he regularly travels to Orient, in particular, to China. In 1993, 1995, and 1997, he takes part in the Biennal in Venice and in numerous other international events devoted to contemporary visual arts. In 1996, he holds a retrospective exhibit of his work at the Folkwang Museum in Essen. Barbieri's images may be viewed in museums and universities in Italy and abroad. During the same period of time, several volumes on the artist's his work are published: Paesaggi in Miniatura, Art& Udine 1991. Notte, Art&, Udine 1991. Olivo Barbieri seit 1978, Museum Folgwan, Essen 1996. Artificial Illuminations, Smithsonian, Washington, D.C., 1998. Virtual Truths, Silvana Editoriale, Milano 2001. Notsofareast, Donzelli, Roma 2002.