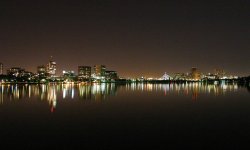 An experiment in digital photography exploring the nights and lights along the Charles River in Boston. This film is made up entirely of still photographs sequenced together to appear in motion. By making subtle adjustments between each photograph taken, the lights of the city seem to come to life.

Chris is currently finishing an MFA in Film Production at Boston University. His first semester production, MELO, was awarded first place in the 2004 Eastman Scholars Competition. Nightlight recently earned him honors as "Most Promising New England Filmmaker" at the 2005 Boston Underground Film Festival.

Director Chris Messina will be available for Q&A after the screening.