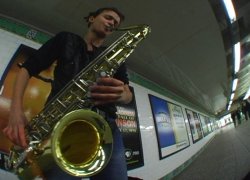 "A Subway Siren" is a verite style portrait of a young Italian woman (Francesca Ferrando) who wanders through the New York City subway system with her saxophone. Footage of Francesca performing in the Subway is juxtaposed with interviews and shots of various mosaics found in the NYC Subway.

Vince is a New York based filmmaker who recently relocated from San Francisco, CA. He is a graduate of the San Francisco State University Cinema program. His first short film "Phantom Donut" screened at several festivals and screening series, including the Big Bear Lake Film Festival, the San Antonio Underground Film Festival, and the Flicker film series. "A Subway Siren" represents his first foray into the documentary format. He is currently in post production on his first feature length film "Val's Video Valhalla."

Director Vince Tocce will be available for Q&A after the screening.