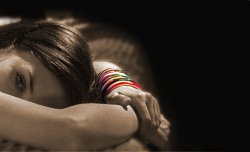 "We're gonna play a game of Snap! Pick a bracelet. Pull it hard!" But it's a game of desperate consequences in YOU ARE ALONE, a dark exploration of just how far a man and a woman will go to escape loneliness, if only for an hour. Daphne, a Yale-bound high school senior whose depression has blurred her sense of reality, works as an escort, advertising her services online. It's a little bit of a "fuck-you" that helps get her through the day, until her next door neighbor catches her as the "entertainment" at his nephew's bachelor party. With her hidden life precariously hanging in the balance, Daphne agrees to spend one hour with her neighbor. Initially confrontational, Daphne and her neighbor begin to shed their bitter layers of personal disappointment and general cynicism by talking about sex. It's eye-opening for her neighbor: BBBJs, dining at the Y, salad tossing, and, of course, Snap! But behind this teenager's jaded fantasies hides the very essence of heartbreak, acceptance, need, and desire...ironically paralleled by a broken man's desperate attempts to test the limits of her advertised promise to do anything and everything.